Are We Safe From Self Aware Robots?

The threat posed by artificial intelligence is discussed by UBC postdoc Justin Hart in a new article in CIO.

New Scientist recently reported a robot became self-aware after it recognized the sound of its own voice in a test by a New York lab.

“The test also shines light on what it means for humans to be conscious. What robots can never have, which humans have is phenomenological consciousness: ‘the first-hand experience of conscious thought,’” said Justin Hart, post doctoral fellow at UBC’s Collaborative Advanced Robotics Intelligent Systems Laboratory. 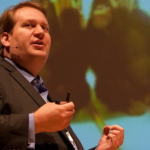 Link to the full article on CIO.

More on CARIS lab at UBC and Justin Hart's research.